I had been following the adventures of the Terror Scribes with some interest and couldn't resist this gathering. I caught the train to Sheffield (delayed for ages because someone had decided they couldn't take it anymore and jumped in front of a train at Leicester) and made my way across a really interesting/dangerous traffic island to the Howard pub.

The first person I met was David Price and, after he'd introduced himself, I said "Oh yes, you're the grotesque and arabesque bloke" (he edited a magazine called 'Tales of the Grotesque and Arabesque'). Acoustics meant that all David heard was "Oh yes, you're grotesque", which he thankfully found funny. Simon Bestwick then came over to introduce himself (he wrote the story "Going Under, Flying High" which appeared in Sackcloth & Ashes and I sent him a 'fan' letter, declaring it as good as "Later" by MMS). 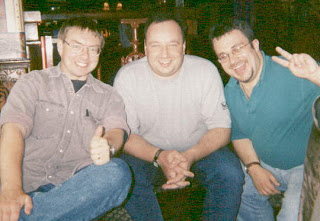 Paul Lockey, me, Simon Bestwick
The rest of the afternoon was a bit of a blur - the beer in that pub was really strong - but I met, amongst many others; Paul Lockey, Derek Fox (a real gentleman), John B. Ford (the organiser and someone who wants to do great things with the British small press/horror scene), Paul Bradshaw and his wife, Rob Rowntree, Lisa Negus, Des Knight, Paul Kane, Simon Clark, the ladies from Strix and the chap who runs Sarob Press. There were others, but time has robbed me of their names now - sorry!
All in all, it was a great afternoon, extremely friendly and easily worth a train journey double the length it should have been. 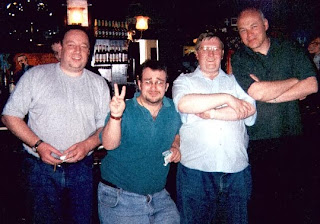 Newer Post Older Post Home
Subscribe to: Post Comments (Atom)
Writing is, by its very nature, a lonely job and it's always nice to realise that you're not alone in your quest to sit and listen to the real world go on around you, whilst you try to put down in words the worlds that exist only in our heads.

Conventions are great, an opporunity to meet up with like-minded souls and have some fun. To that end, here are some reports on Con's I've been to.